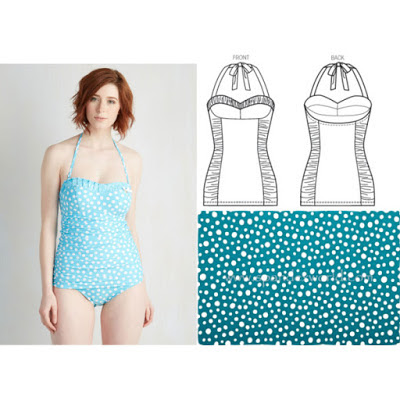 Hi People Still Reading My Blog (or linking through from Pinterest or Tumblr!)  I keep thinking about how it's been so long since I made a Fashion Plate or wrote a blog post and I need to get on it. The longer I went without writing something, the easier it became.  So I'm kinda bored at work today and it's Tuesday and I decided it was TIME!

Today's Fashion Plate is the "Splash Bash" swimsuit from ModCloth.  It's so stinking cute and of course features some lingerie lace at the bodice because this is one of Betsey Johnson's designs.  While Gertie's swimsuit pattern B6067 isn't a perfect match, it's pretty darn close.  Spandex World has a plethora of polka dotted fabrics perfect for swimwear.  I chose to feature this turquoise/white combo for this Fashion Plate.

I hope to be back with another Fashion Plate next Tuesday!
Posted by Letitia at 4:00 PM 1 comment:

GUYS!  I made soup and it is SO GOOD!  I had a bunch of old/leftover veggies, so I kinda started with that and decided I wanted to use some random ground beef and some pasta.

I'm labeling this a stew because I figure I could eat it with a fork if I wanted.  That's my soup/stew line.  Eat with a fork & sop up the juice with bread = stew.  Spoon required = soup. 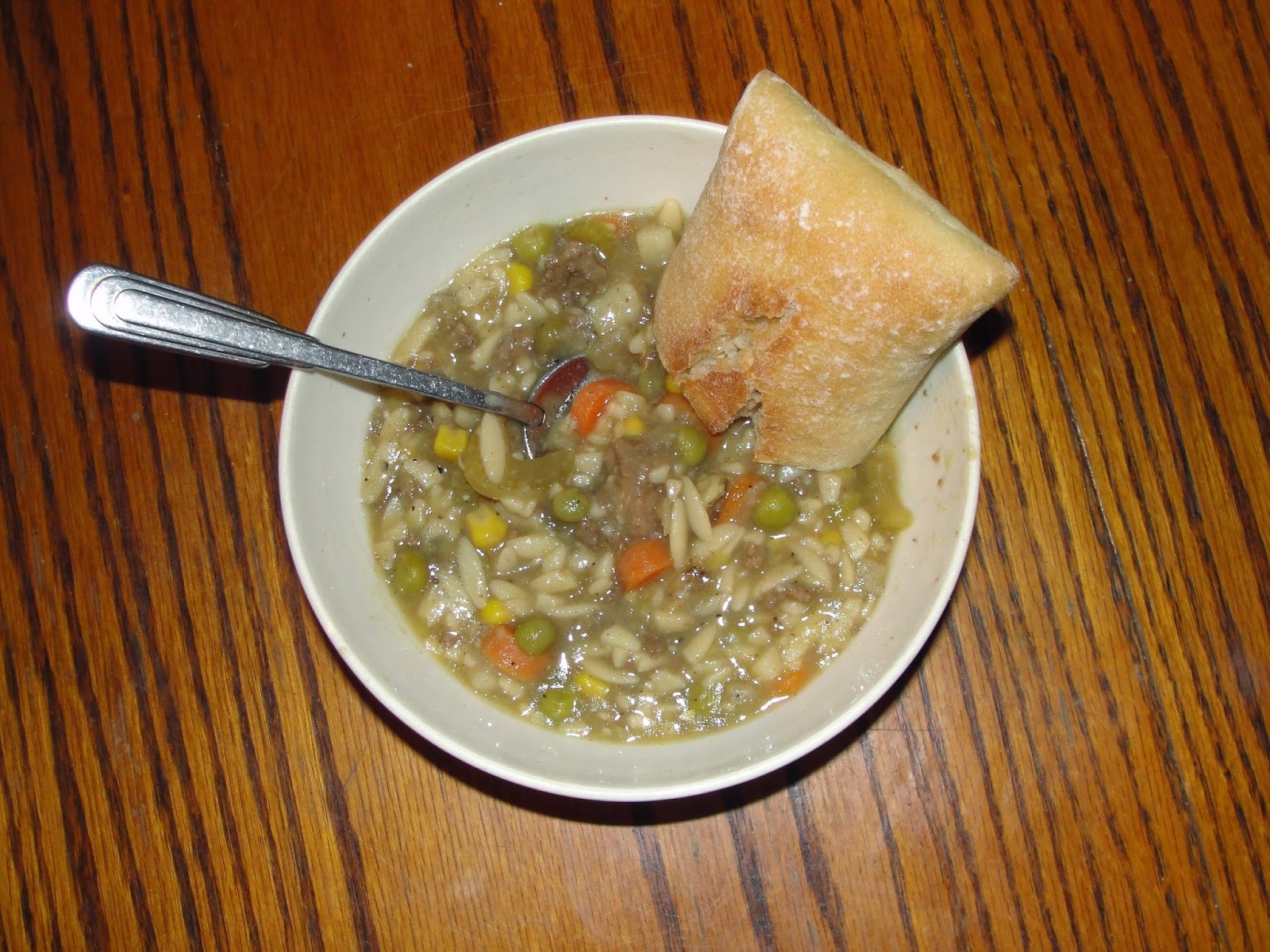 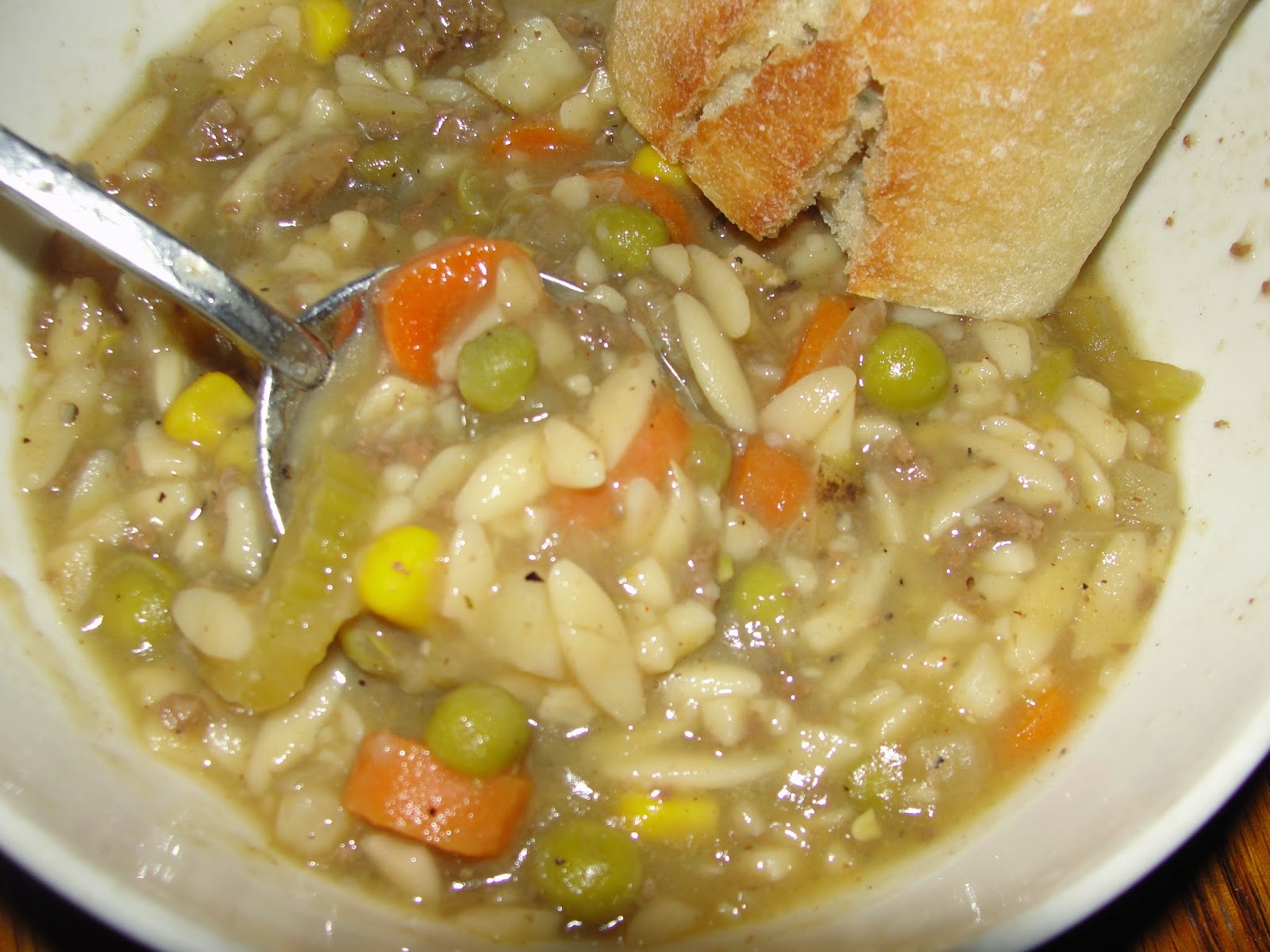 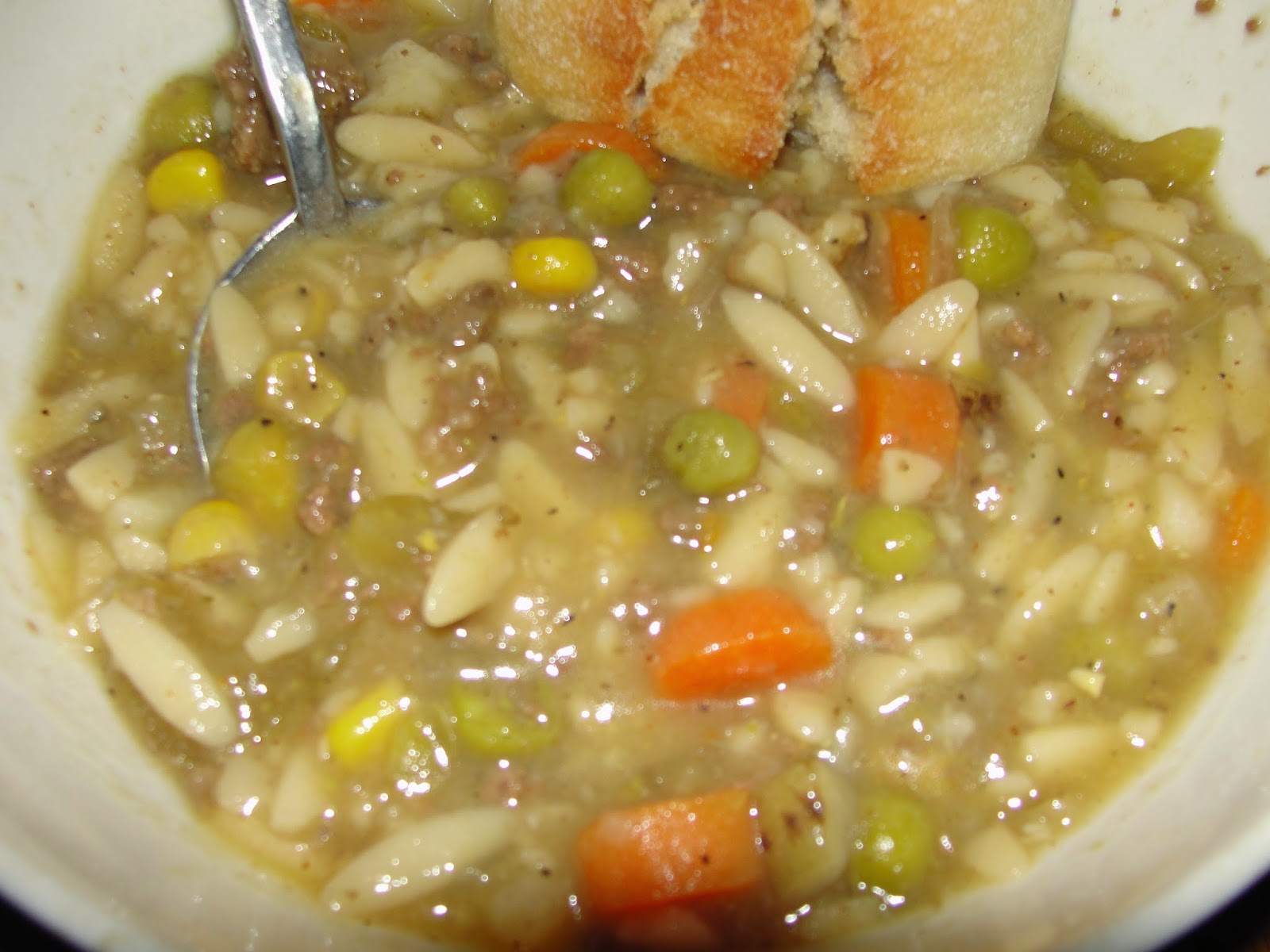 So much goodness all in one bowl.  I love it when things work out better than I expect.  Below is what I used, but feel free to substitute for what you have on hand.  The great thing about stew is that it thickens while it stands too.  You can add water each time you reheat to make the stew stretch a bit further.  This was also obscenely cheap.  It cost somewhere around $7 for the whole pot.

Here's the printable, which opens a print dialogue box in a new window.

Veggie Orzo Beef Stew
Ingredients:
3/4 pound ground beef, cooked and drained
4-5 cloves of garlic, minced (about 4 teaspoons)
1 medium onion, small dice ~1/4"
1 potato, small dice
8 celery stalks, chopped to 1/4"
8 oz baby carrots, chopped to 1/4"
1 can of peas
1 can of corn
6 cups water
6 teaspoons beef bullion granules (or 6 cubes)
1 tablespoon black pepper
1 teaspoon paprika
1 teaspoon red pepper
1/2 teaspoon white pepper (can omit if it's not in your pantry)
1 teaspoon oregano
1 teaspoon salt
1 bay leaf
2 cups orzo pasta
2 more cups water
3 teaspoons corn starch
Directions:
In a large stock pot, combine everything except the corn starch, the second amount of water, and the orzo pasta.  Bring the pot to a boil.  Once boiled, turn down to a simmer.  Cook for 45 minutes.  Add the orzo pasta and the second amount of water if needed.  Simmer for 15 minutes more.  Stir in the corn starch at the very end.  You may want to mix the corn starch with a bit of water before adding it to the pot.  That will prevent lumps.  I did not do this, but I also didn't have consistency issues when I tossed the corn starch in the pot and stirred.  YMMV.  That's it!

This is a fairly low-maintenance recipe once the chopping, ground beef browning, and boiling is done.  You just kind of set it and forget it.  Stir it a couple times an hour or whatever and you can leave it on low heat all day.  I cooked the soup long enough for the onions to basically disappear.
Posted by Letitia at 6:00 AM No comments:

So I Ran a Marathon

A MARATHON.  That happened exactly 3 weeks ago.  I'm pretty impressed with myself since exactly one year ago at the date of the marathon I was decidedly NOT a runner.

My first ever marathon was the Rock N Roll in Savannah, GA.  Savannah is one of my favorite towns in the country and it was great to see it in a different way.  It was a nice weekend.

I started the morning at 4am eastern time. I’m on central back home, so other than being the butt crack of dawn, I didn’t have any daylight savings issues. I ate a cliff bar for breakfast and downed a bottle of water before leaving my hotel room. I parked at the convention center at 5:30 and decided to use the portapotty before crossing the river. The ferry line ended up 1000 people longer during that time! I saw a gorgeous sunrise while waiting for the ferry though. 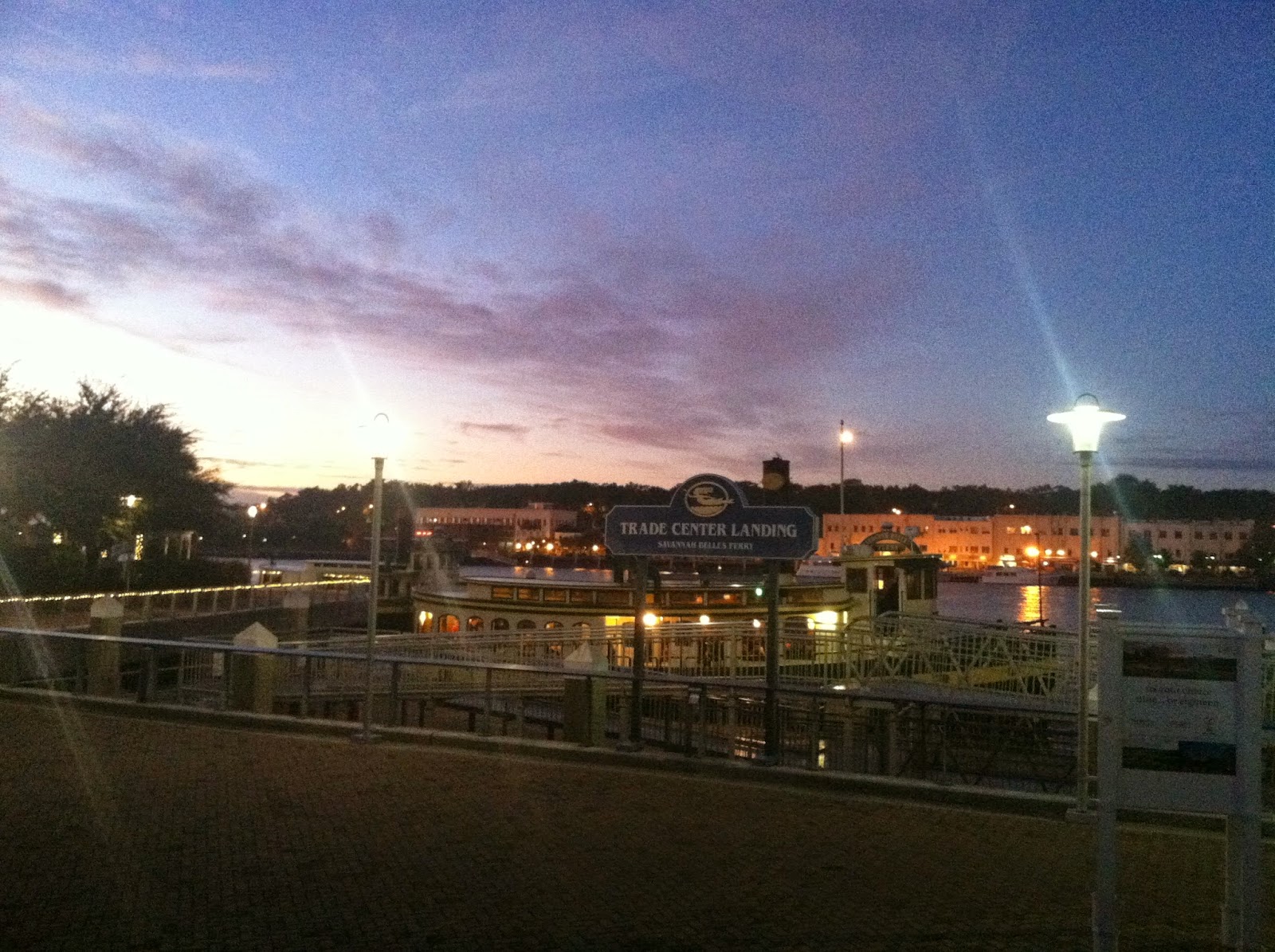 Good thing I used the toilet when I did. This is only one of several lines of toilets. I saw one guy pooping in the corner of a building, which, UGH! 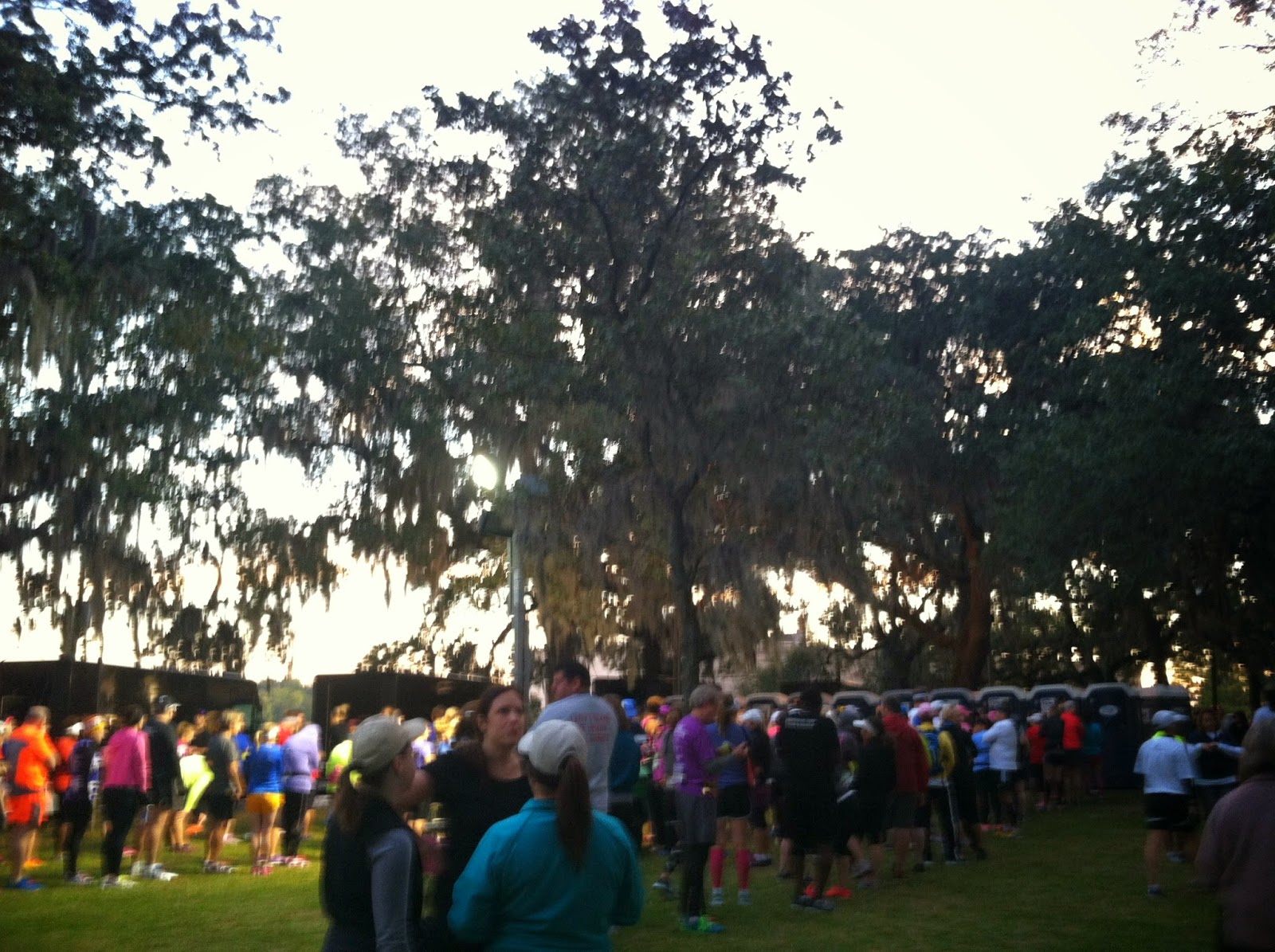 The slowpokes get put in the back of the line. I couldn’t even see the start from where I was. 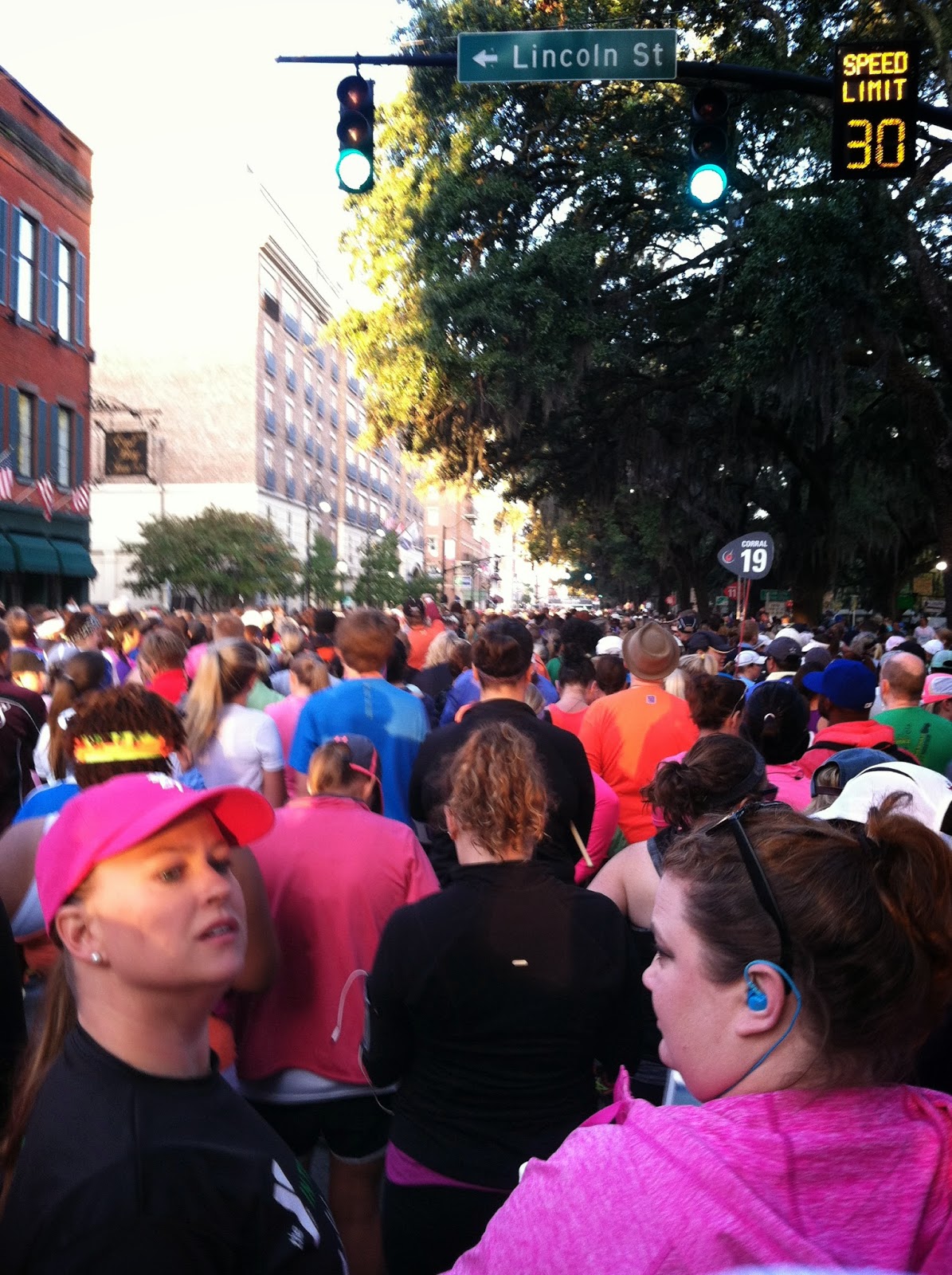 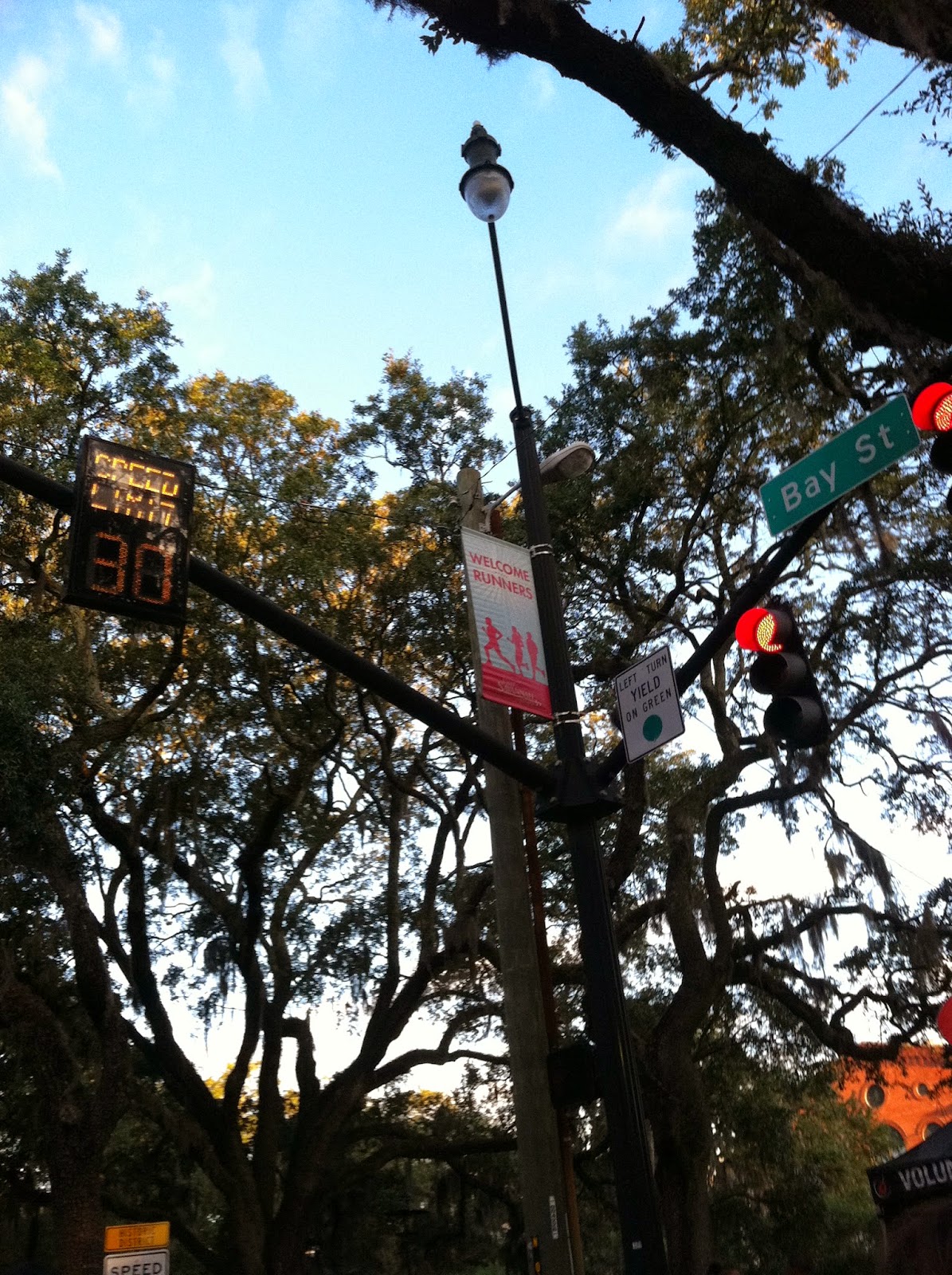 There is a man wearing orange cheering all the runners on from the hotel balcony.  :) 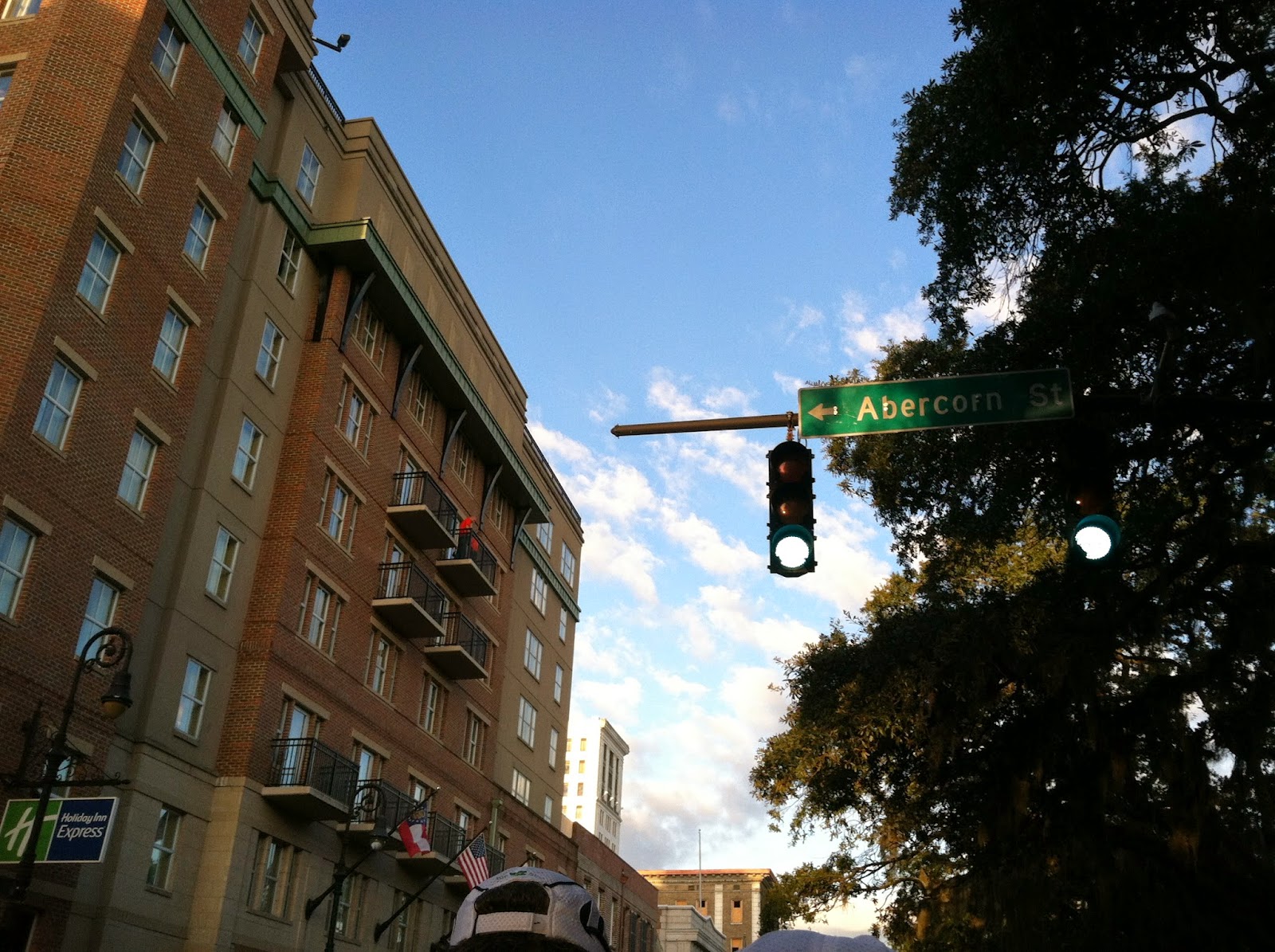 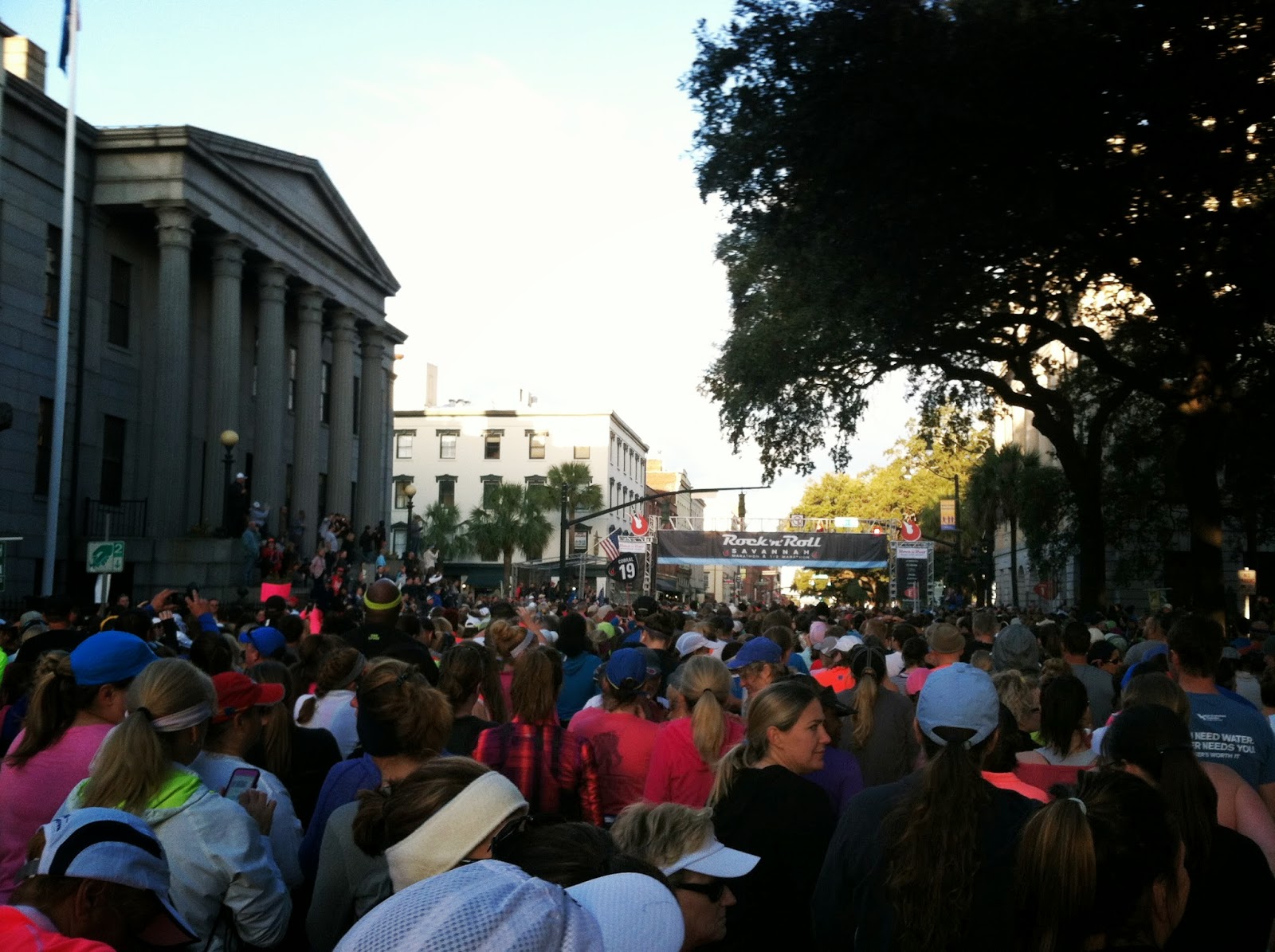 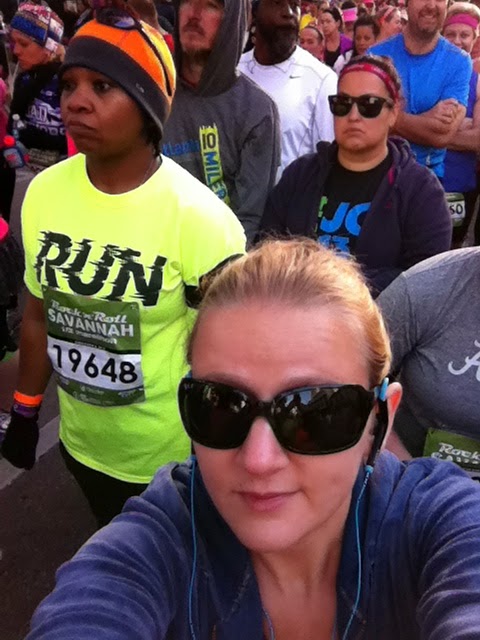 1 corral left! Should have kept my sunglasses on. :) 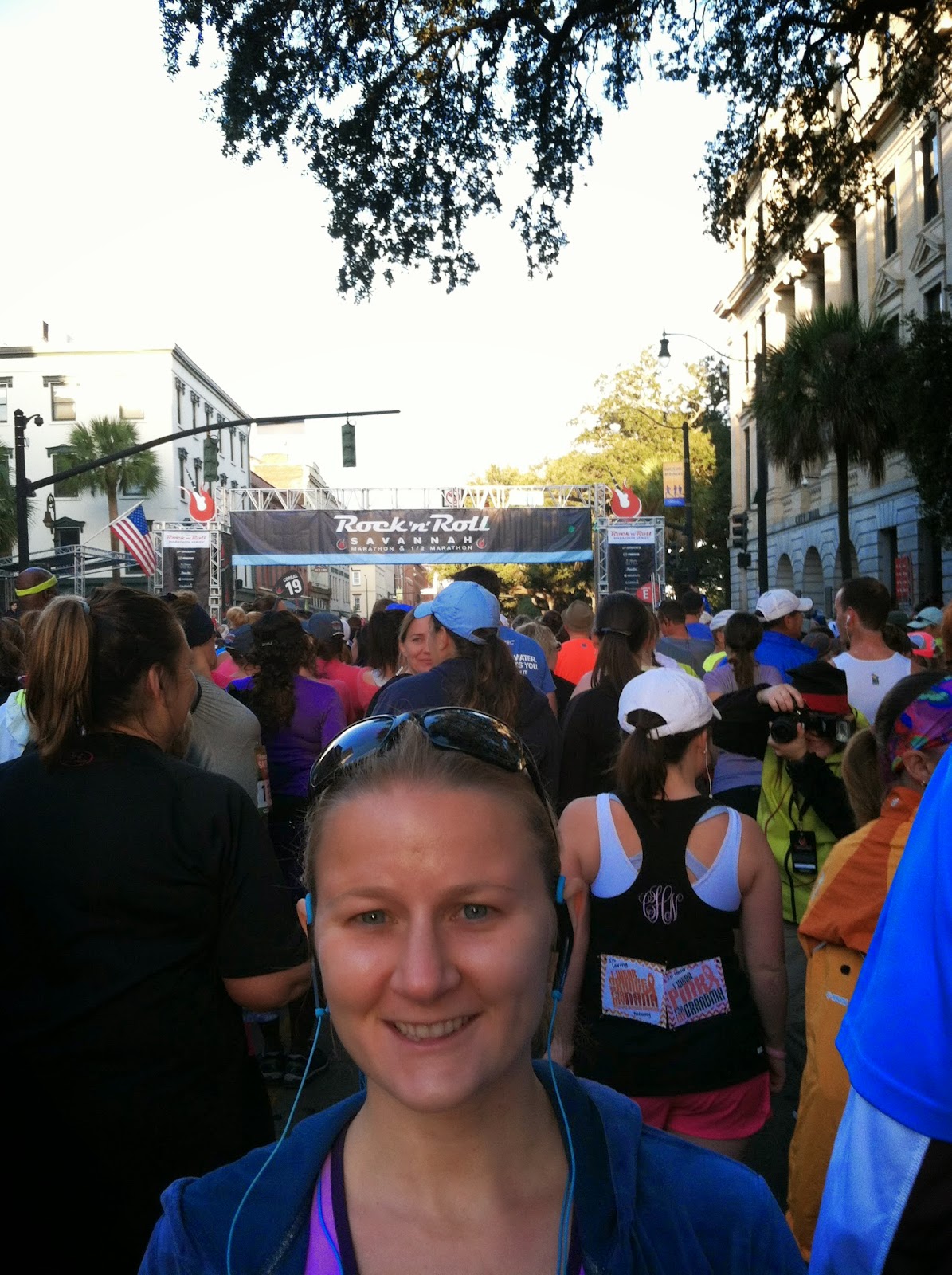 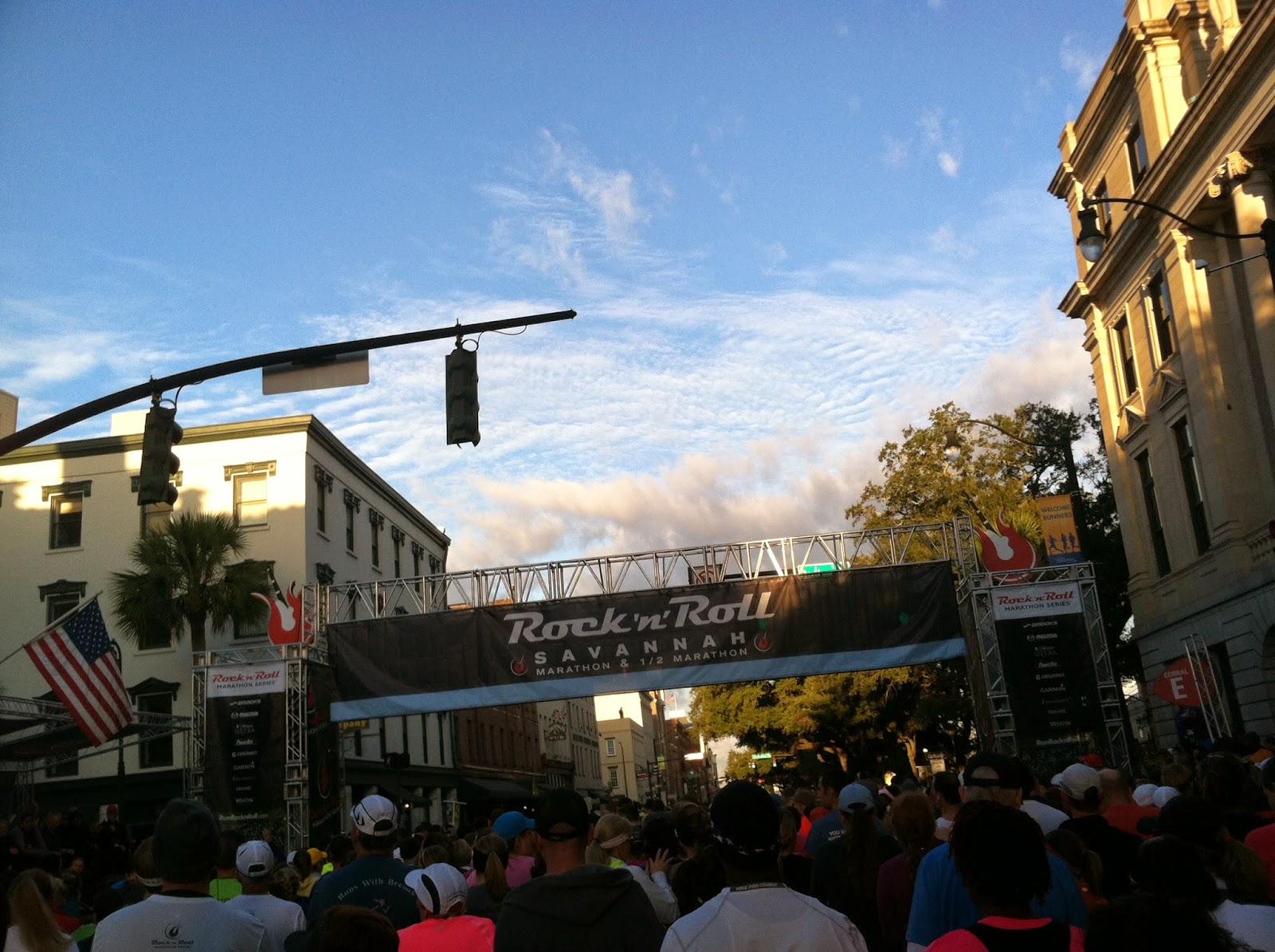 I ran a fairly strong first 5 miles. I loved seeing all the people cheering us on from their houses at 8am. Their coffee smelled so good! I felt like I took off too fast. Looking at my 5k time, it only seemed like I was going too fast; there were far too many people so close together to really take off. (36:41 5k) 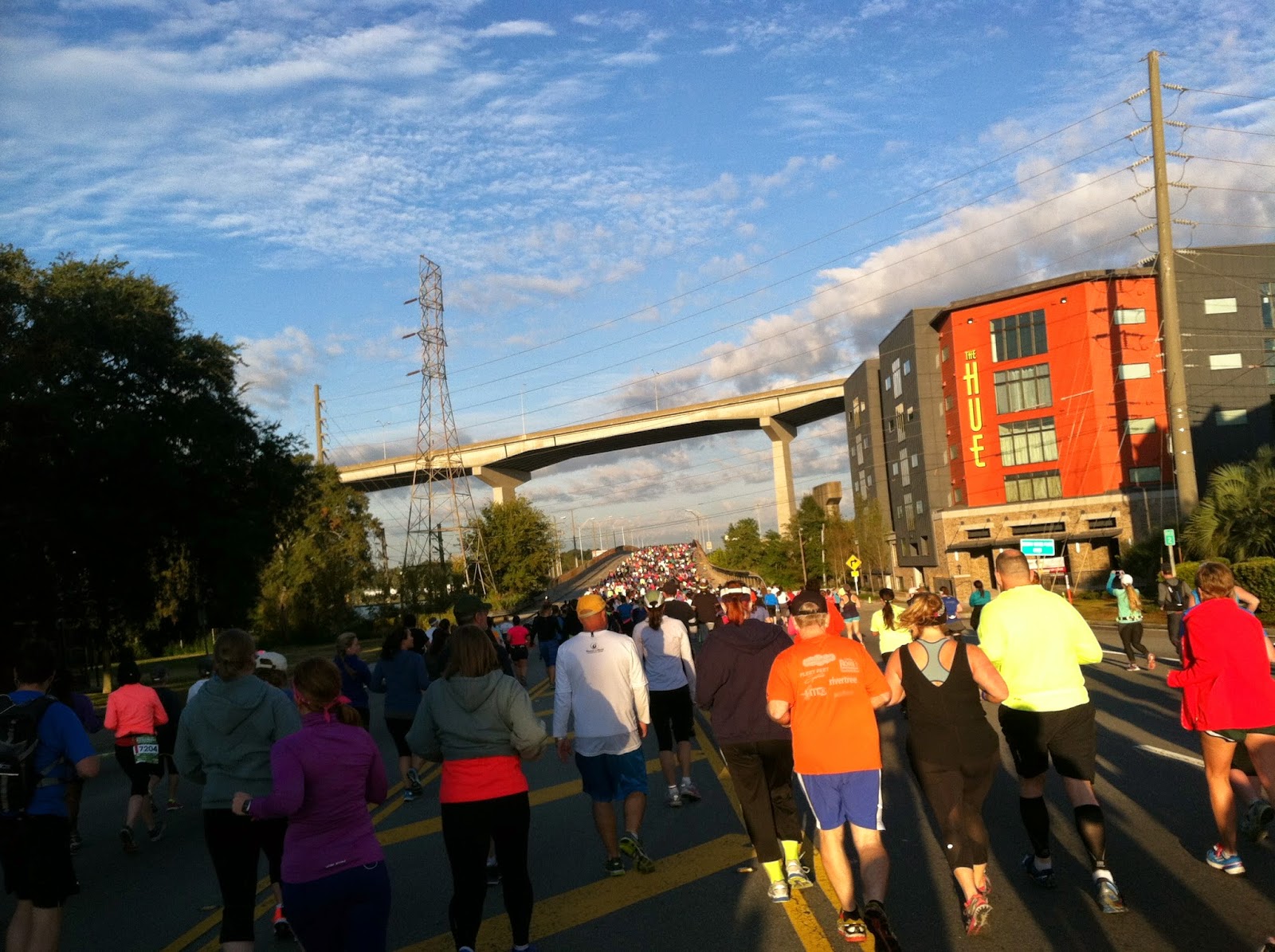 I tried to cheer on all the other marathoners along the way. It seemed like there were 100 half marathoners for every marathoner on the course. Us long-distance crazies needed to stick together! One lady was supposed to run the full, but she wasn’t comfortable with it after not being able to stick with her training schedule. She was running the half with her friend instead. She told me I was killing it at the 10k mark and wished me well. (1:15:16 10k) I liked sexy
guitar man around mile 8. He was a hit with the runners as you can see from my photo. 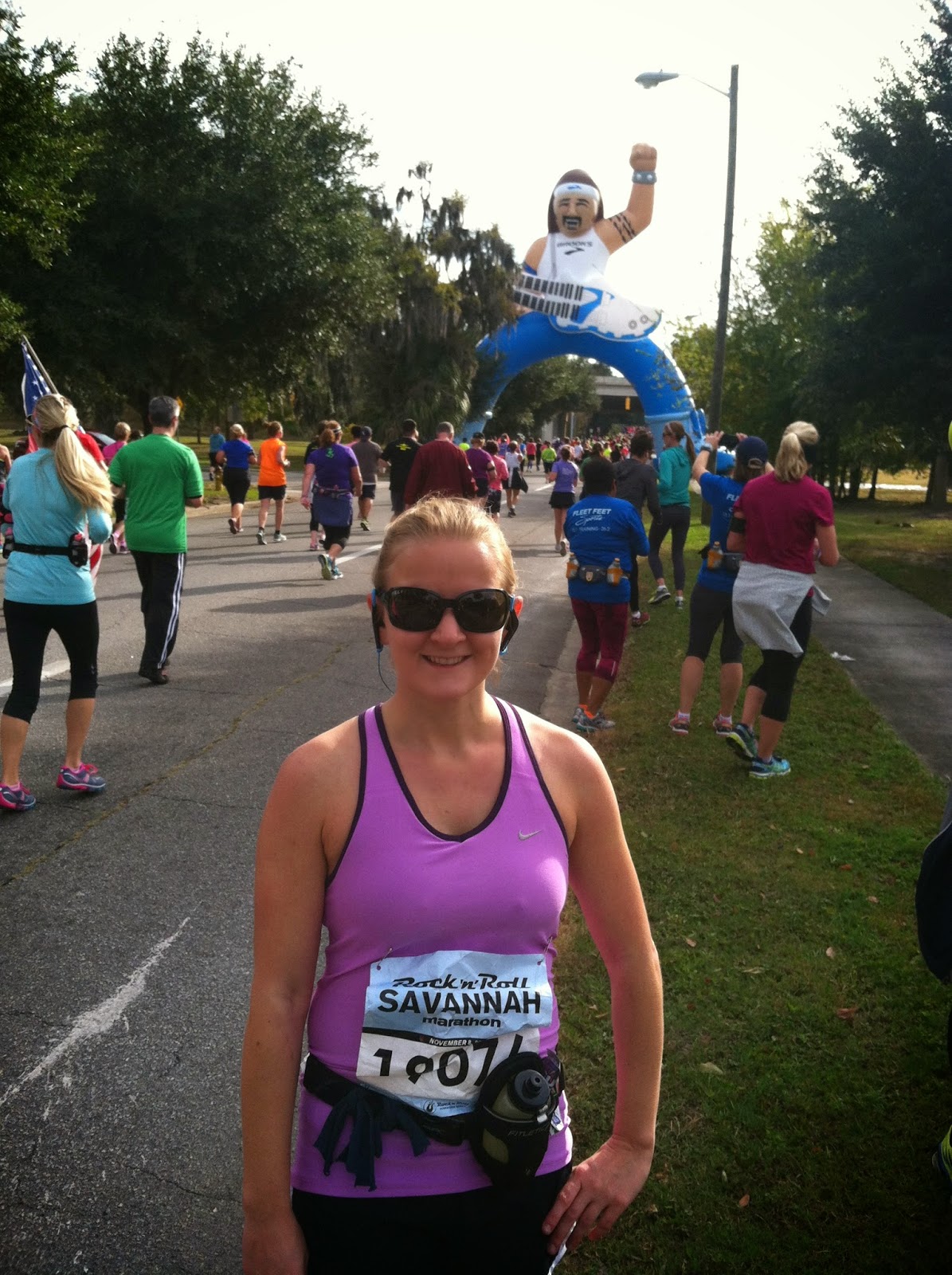 The local daisy girl scout troupe put together the most adorable paper plate daisies for one neighborhood at miles 10-11. That was a gorgeous neighborhood. We’d never have anything like that where I live. (2:03:31 10 miles) I was prepared to make the marathon split at mile 11 and I started FREAKING OUT when it didn’t happen. The split was closer to mile 12. I thought I might have followed the crowd and not made the turn when I needed to. It got so lonely after the split. Marathoners to the left. 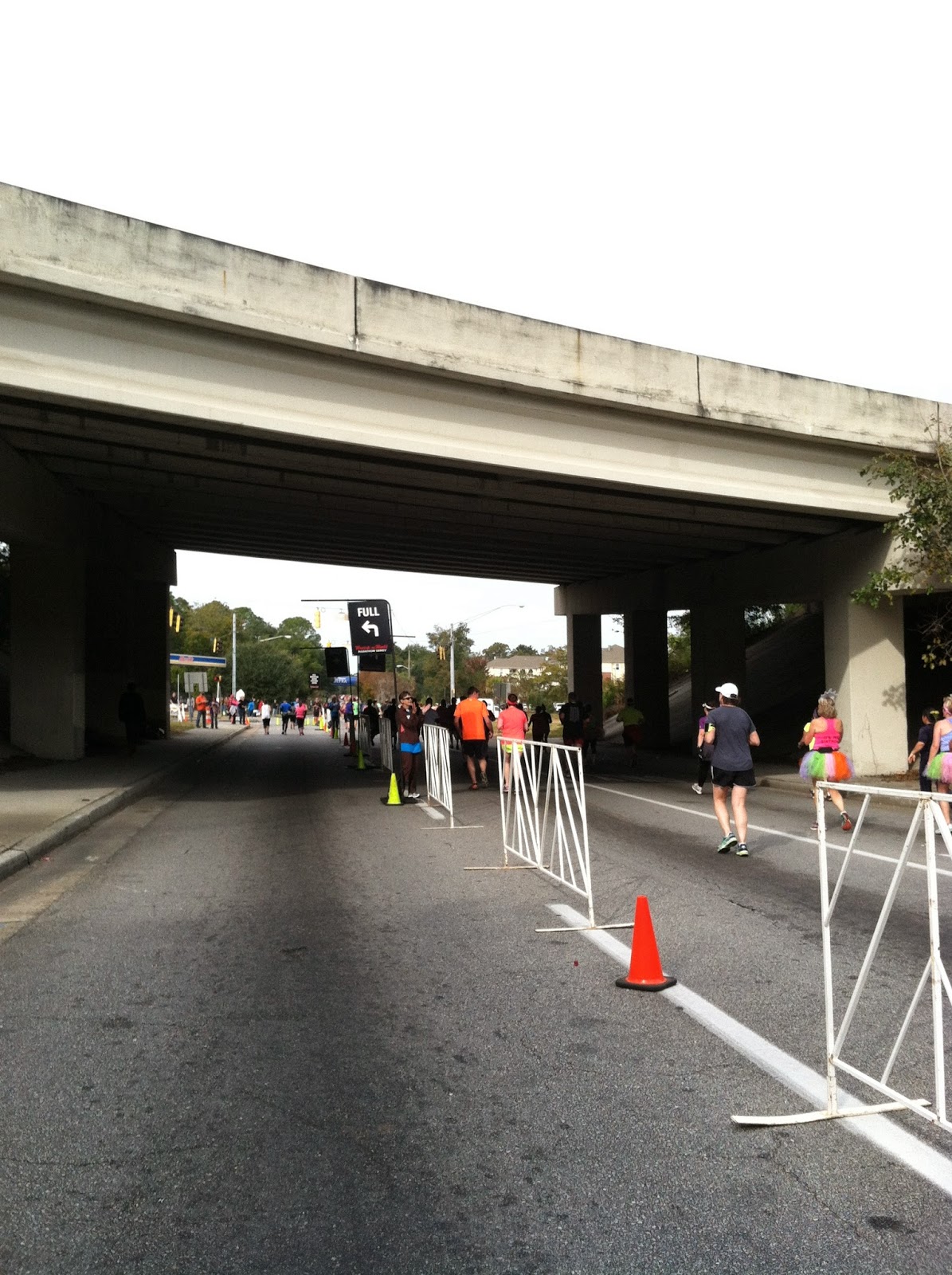 I hit the halfway point at 2:41:45. Every mile after this one was totally uncharted territory. I don’t recommend training for a fall marathon if you live in Florida. It was stupid-hot out and miserable to run in, so I mostly didn’t. I’d run 11 half marathons to this point, including a pseudo-marathon experience (in my opinion) of a 10k, 5k, half marathon weekend. I felt so ready for the marathon after that last half. I ran my second-fastest half marathon time and I was on tired legs when I started out.

We ran through Savannah State University for about 3 miles, including a lap around the track. There were some guys stretching before doing their own runs at the school and I yelled out to them “we are just warming up the track for you!” They laughed. One of the band singers (I think at miles 14.25 and 17.5) yelled out at us that he would be running his marathon after we finished up. I told him I’d be waiting for him at the finished line. I was in really good spirits the entire run, though I definitely slowed down quite a bit after the half. I think it was mostly because I felt like I was by myself out there and we were running along the highway for a ways. My 20 mile time was 4:16:01. 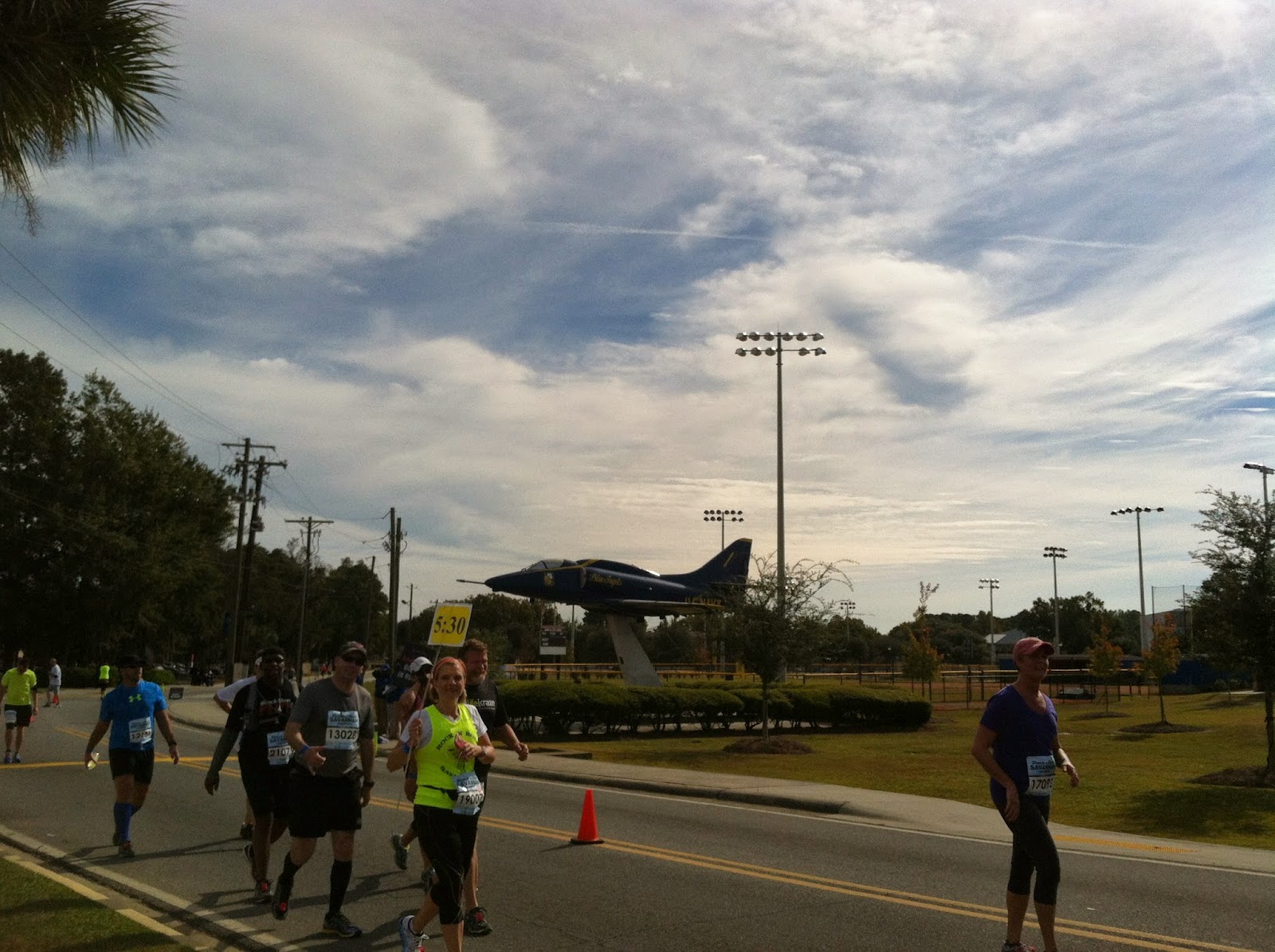 I didn’t particularly like running past the soccer field miles 19-22. It felt like the organizers were trying to find places to have us run to make those miles. We were running the wrong way down streets and turning around and going in the other direction. Miles 23 & 24 were back on the highway. The finish line came quickly after getting back into downtown, though the finish line was confusing! There were so many cable ramps and scaffolds that I couldn’t quite see the finish line. I sprinted to the “finish” too soon and had to walk to catch my breath before sprinting to the actual finish. D’oh! And yes I did have that much gas left at the end. I finished in 5:44:43. I put 5:45 as my prediction, so go me!

I never felt “the wall” people warned me about. I noticed pains I hadn’t felt before at points. My butt got tight for a couple minutes, so I awkwardly walked it out while doing a nice meat mallet pounding. My tailbone started hurting. That was weird. My ankles were fine. My calves were really okay. I even made my “A goal” of walking back to the ferry from the finish line. As far as the goodies go, some of the things were packed up already. There were boxes and boxes of pretzels, but no volunteers handing them out. I wanted one of those solar blankets because I was COLD, but again, no volunteers handing them out. I could see the solar blankets on the pallets! The secure zone should be fully manned until the very last runner comes through. There was still over an hour before the course closed. I find this unacceptable, especially considering these people went 26 miles.

Here I am with my medal. I finished. 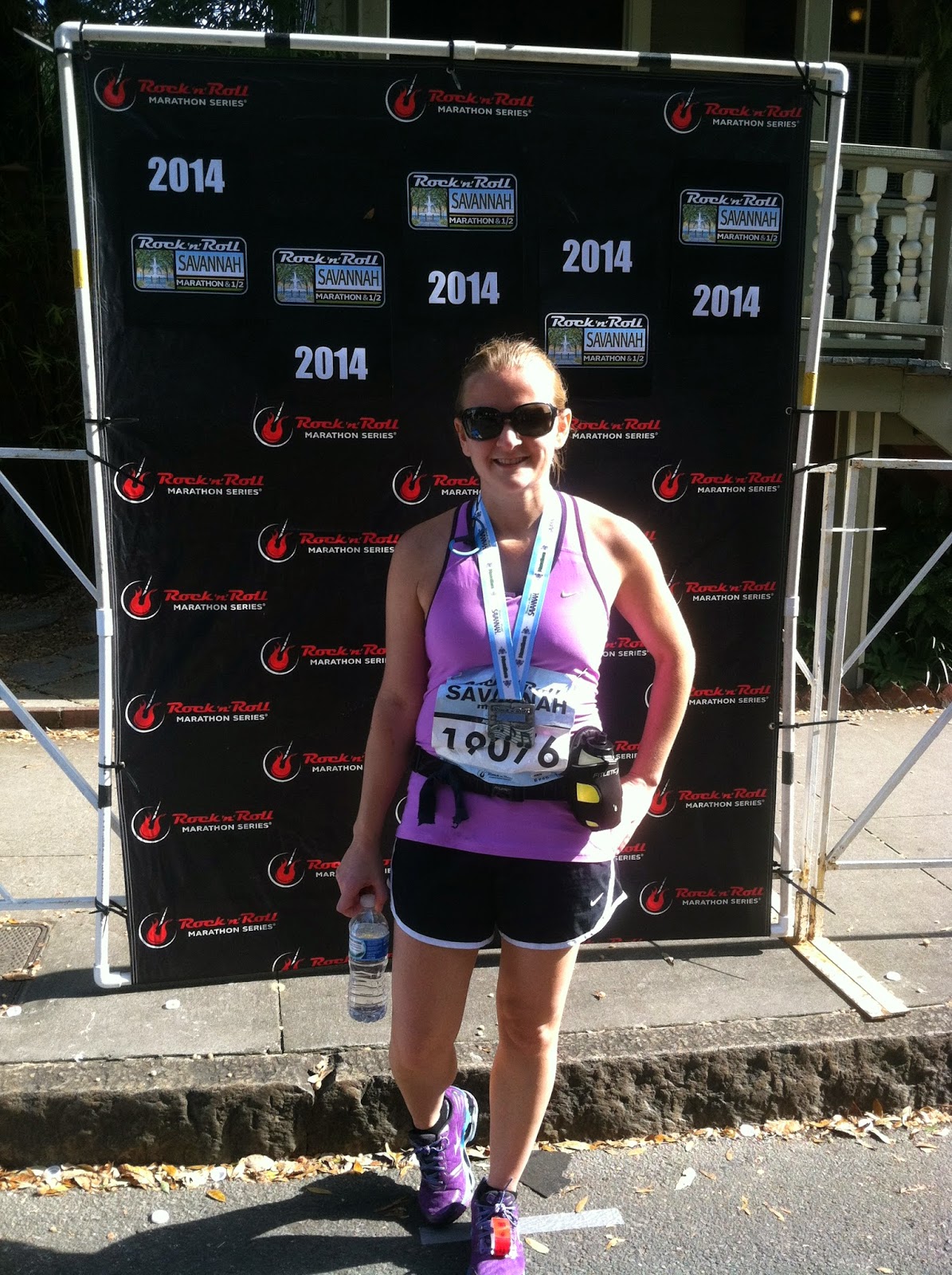 Actually, not the end.  Getting to this point was not easy. In the weeks leading up to marathon day, it was something I had doubts I could complete.  I kept reminding myself that I was stronger than I thought I was.  There would be days I thought I couldn't run a marathon, but a lifetime ahead of me knowing that I did.  Now I feel... 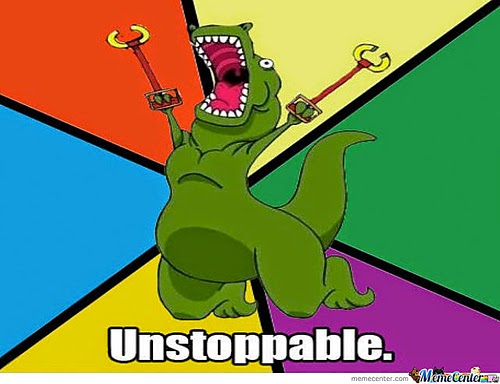 Me Made May 14 button